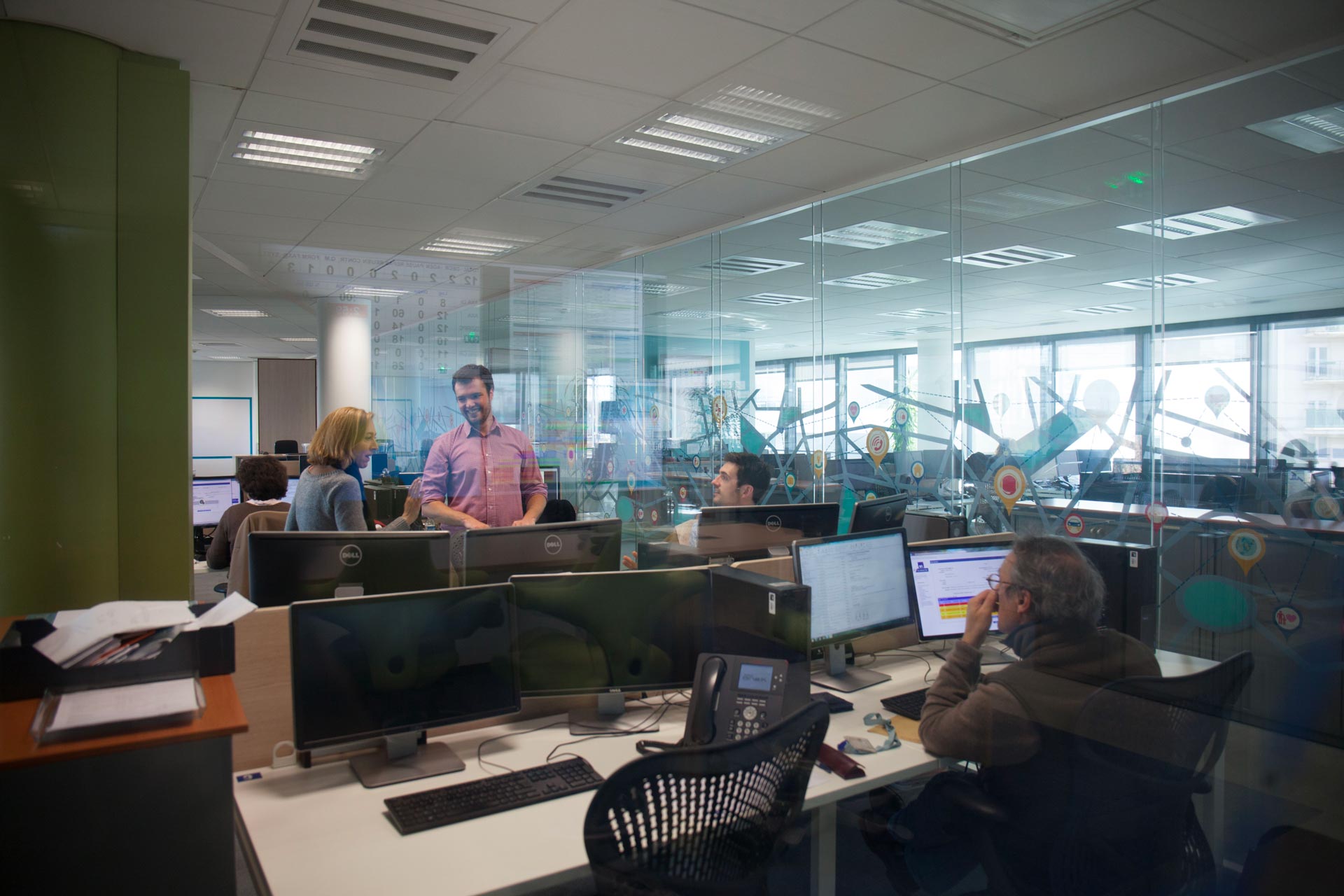 As the first private company to launch remote medical consultations for French patients, AXA is enhancing its offering in pace with regulatory and technological progress. In France, these new services have already proved successful, with high user satisfaction ratings. A good example is the AXA Partners platform, a telemedicine service accessible to 5 million beneficiaries 24/7 by phone or online through www.bonjourdocteur.com Caring for Life

Working from a 100 m2 call center in the suburbs of Paris, doctors and nurses take daily calls from patients, AXA clients and affiliated top-up insurance companies. Nawal, a hospital nurse, is their first point of contact. “Before transferring patients to a doctor, I welcome them and identify their needs. Unlike medical secretaries, my training as a nurse enables me to quickly detect and prioritize serious or urgent cases or even guide them to an emergency service right away.”

These first elements are communicated to the doctor who receives the transferred call. “It’s a first line of questioning. In a teleconsultation, it’s important for us not to miss anything. For example, one of my patients didn’t think to tell me she was seven months’ pregnant, since she was so used to people noticing it!” commented Dalila, a general practitioner.

Like her colleagues, Dalila works for 10 hours a week on the platform. This rota enables the service to integrate a wide variety of profiles. As a forensic medical practitioner, she has also worked in hospital emergency departments and in a town-center office. “Remote consultations take experience. I don’t know if I could have done this after I’d just come out of medical school.” Philippe confirmed, “We learn to develop new senses, to understand what people are not saying. To interpret the signs, you need to have some years of practice under your belt.”

Philippe has worked in counseling and now works as a liberal practitioner. He sees telemedicine as a much-needed service for people who have trouble getting an appointment due to the shortage of doctors. The platform serves diverse types of patients, but what they all have in common is “being comfortable with the fact of not facing physically a doctor and having difficulty getting an appointment to suit their agenda. Usually, these people would give up trying to see a doctor and might miss serious symptoms.” A few months ago, Dalila diagnosed meningitis in a 10-year-old girl, who had been treated with aspirin.

A service to complement local surgeries

After a teleconsultation, several solutions are possible. First, explaining what to do if symptoms get worse, can sometimes be enough to reassure patients. They may also be redirected to a specialist partner through another teleconsultation platform, or emergency services. The doctors can also write prescriptions when necessary, but not medical certificates or sick notes without a physical examination.

While remote examination techniques continue to make great strides, “teleconsultations will not replace regular follow-up with a regular doctor, but they are a great way to provide a first response to patients who are pushed for time or cannot easily access treatment,” concluded Philippe. They also offer a credible solution to the health issues encountered by many emerging countries: developing universal access to healthcare, while relieving emergency services and reducing the cost of healthcare systems.

A cure for medical deserts

In 2019, a type of medical inequality cuts across many regions: “medical deserts”, areas without sufficient numbers of doctors – particularly physicians – to provide everyone with the same access to quality healthcare. This is not due to a lack of health professionals at the national level, but instead to their unequal distribution across territories.

Many countries are affected. In France, 8% of the population lives in one of the 9,000 municipalities that lack physicians. This situation is all the more concerning as it relates to all region types - rural and urban - and because it is likely to deteriorate, as not all retiring physicians are being replaced. The same observation can be made elsewhere in Europe, with expanding medical deserts occurring in the United Kingdom, Belgium and Germany for example, and many other instances throughout the world. For example, the National Rural Health Association in the United States reports that 77% of rural areas suffer shortages of primary healthcare professionals, while 9% do not have a doctor.

Given the situation, what actions can be implemented? Public authorities are tackling the issue through various trials: incentives to encourage young doctors to move to disadvantaged areas, the creation of interdisciplinary health centers, better cooperation between health professionals, establishment of mobile medical services – such as health buses that travel to remote areas... And, of course, telemedicine to respond to emergency situations with remote diagnoses, and for everyday healthcare issues.

To make progress in this field, AXA and the Hauts-de-France region have joined forces to launch a medical teleconsultation program. Established in Marconne, in the Pas-de-Calais French department, this system enables each patient to benefit from on-site nurse support while their condition is monitored remotely by a doctor, thus combining human interaction with the use of new technologies.