Make It Work - Assessment and outlook

With the opening of the 21st international climate change summit, COP21, less than a month away, it is time to assess the achievements of a ground-breaking initiative, Make It Work, during which 200 students from around the world gathered for three days and three nights to negotiate the terms of an agreement to limit the effects of climate change. AXA is proud to have supported this important event and to be making a daily commitment to fight climate change. ALL ARTICLES  |  Commitment

From May 29 to 31, at the Nanterre-Amandiers theater outside Paris, 208 international students gathered to participate in a life-size simulation of the climate negotiations that will begin on November 30, for COP21. Forming 41 delegations representing traditional participants (state and international organization leaders) and more unexpected non-state parties (forests, cities, oceans and deserts), the students sought to deliver an innovative agreement to protect the planet. 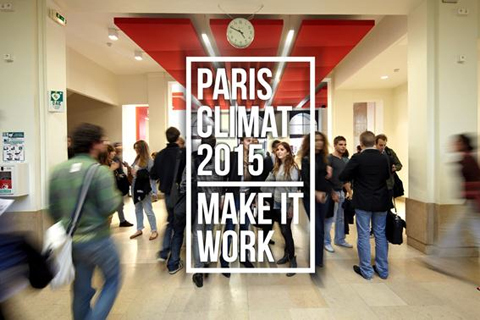 After three days and three nights of grueling negotiations, the delegations achieved a consensus, which materialized in the form of a document more than thirty pages thick. The final text contains creative and ambitious proposals, such as creating a status for climate refugees, taking imported greenhouse gases into account, creating a global environmental organization, establishing a carbon market by 2050, and recognizing ecocides as crimes against humanity.

The text will serve as an example for France's envoy when the "real" negotiations take place in November and December. Laurence Tubiana, director of the sustainable development chair at Sciences Po and the special representative of Laurent Fabius to COP2, will be able to use this innovative deal achieved outside of the UN's traditional negotiation framework by proposing to give the floor to new players who are too often excluded from the negotiating table.

AXA makes a commitment to the climate

AXA is proud to be a partner of "Make it Work" and contribute to finding solutions to climate issues. The AXA Research Fund supports more than 100 independent researchers around the world to promote their work. In October, together with the United Nations Environment Programme Financial Initiative, the AXA Group published the findings of its first study on the resilience of cities and SMEs to climate change.

It is AXA's responsibility as a leading insurer to be an expert on these issues, be aware of climate risks and how to protect against them. On October 14, Henri de Castries, CEO of the AXA Group, spoke on this topic at the French university Sciences Po as part of "Make it Work", to show how public-private partnerships can offer solutions to climate change.